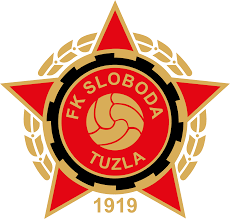 Fudbalski Klub Sloboda Tuzla is a Bosnian professional football club based in Tuzla, Bosnia and Herzegovina. The club is a member of the Football Association of Bosnia and Herzegovina and has been active in country’s first division since it was founded, an exception being a two-year stint of playing in the second division after the club got relegated to it in the 2011–12 Premier League season. Sloboda got promoted back up to the Premier League in the 2013–14 First League of FBiH season, and has been playing in the country’s top division since.

FK Sloboda Tuzla is committed to its social responsbilities and to playing an important role in the development of its community. Among the club’s social initiatives is the FK Sloboda Tuzla football school, a programme that aims to promote football through educational activities and training process for children up to 11 years.