About the #Morethanfootball Action Weeks

About the #Morethanfootball Action Weeks 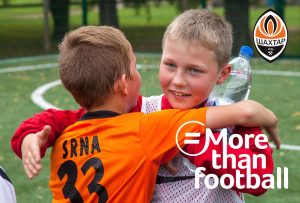 The #Morethanfootball Action Weeks are a global campaign for the European football community to showcase the impact of their community and social responsibility activities and programmes. Initiated by the European Football for Development Network, and supported by UEFA Foundation for Children and ECA, the campaign provides the wider European football family with a platform to inform and engage with fans and stakeholders on their Community and Social Responsibility activities and raise awareness of the transformative role European club football can play in changing peoples’ lives for the better.

During the #Morethanfootball Action Weeks, the participating organisations celebrate the work they do on and off the pitch on a local, national and international level through special match-day activities, digital campaigns and the use of more traditional media methods such as banners, billboards, posters and brochures.

Football has always been much more than just a game. Unfortunately, people rarely see the stories of the excellent daily work being done through football organisations’ community and social development initiatives.

We believe that all European clubs, leagues and FAs go above and beyond organising a game with 22 players on the pitch. So, in 2017 we launched the #Morethanfootball Action Weeks to showcase and further broaden the reach of Community and Social Responsibility in European football.

Clubs, leagues and FAs and their community foundations from all across Europe participate in the Action Weeks. Some of the participants include Juventus, the Barça Foundation, the Chelsea FC Foundation, Inter Campus, Eredivisie, Club Brugge, KSI, Legia Warsaw, Lega Serie A, Shakhtar Social, Pro League and many more. Register your organisation below.

EFDN provides clubs, leagues and FAs with the opportunity to raise money through a professional fundraiser developed in partnership with MatchWornShirt including a free club-dedicated auction page, item collection, payment handling, promotional material and advertising on social media. You set your fundraising goal. We will reach it together.

Result 2021: Together with 14 clubs we have raised more than 86,000 Euro for social projects across Europe.

The goal of the More than Football Award is to honour the best social initiatives in Europe delivered by a European club, league or FA by celebrating the work they do on and off the pitch at local, national and international levels. The Award for the best project promoted during the #Morethanfootball Action Weeks, will be assessed not only on the content and quality of the project but also on the level of promotion and engagement.

Club Brugge won the 2020 More than Football Award powered by Musco Lighting for their project, “The Bear and his Scarf”. The Award winner receives not only recognition for having implemented the most innovative and impactful Community and Social Responsibility programme in European football, they also win a complete Mini-Pitch System™ modular sports solution. The club-branded mini-pitch will be developed in partnership between the Award winning organisation, EFDN and Musco Lighting.