Athletic Club, also commonly known as Athletic Bilbao, is a professional football club, based in Bilbao, Basque Country, Spain. The Club as an institution, along with its supporters are characterised by their desire to defend values which are becoming increasingly uncommon in football and in sports overall in the 21st Century

The European Football for Development Network (EFDN) is proud to present Athletic Club and its project, which has been selected for the shortlist of the More than Football Award 2022. Athletic Club made it to the ‘final four’. The winner receives not only recognition for having implemented the most innovative and impactful Community and Social Responsibility programme in European football, but also wins a complete branded Mini-Pitch System modular sports solution which will be developed in partnership between the winning organisation, EFDN, and sponsor Musco Lighting.

Football is a huge storyteller. The club’s passion is determined by the stories that have come down to them from their colors. The Athletic Club Foundation takes advantage of this potential to help in the educational work of the community, showing football and culture as allies to change the world.

Athletic Club, through its foundation, is the only club in the world which continuously organises cultural activities in its city.  Every year for more than ten years, Athletic Club has put on a film festival and a literature festival.  Thanks to Athletic Club, thousands of people have been brought closer to football in a different way, whether that be through stories shown in films, or books and songs.

The main project objectives are:

In recent years, the Athletic Club Foundation has scheduled more than 200 free cultural events, including art exhibitions, improvised poetry performances in Basque, reading clubs in local schools, film screenings, creative short films and much more. It is a project which has been praised and copied all around the world.

What’s more, via its campaigns to promote reading, the Foundation has distributed more than 50,000 books free of charge to educational centres and football clubs throughout Biscay. Culture and football united together to improve both worlds and, as a result, society too. 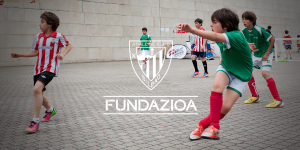 Why Athletic Club is #MorethanFootball